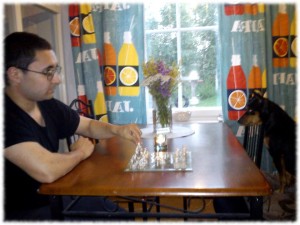 We’ve seen how, without understanding strategy, people may incur in adverse consequences. We’ve seen how we can fail at learning a language or at losing weight. Let’s start to see a couple of examples that can have much sadder outcomes. The first one comes from the field of dog training. Dogs are an important part of the life of many of us, but unfortunately people tend to understand very little about their behaviour.

Actually, as with other fields, most of the things most people “know” about dogs is total nonsense: myths and urban legends that keep spreading without anyone critically thinking about them, and with most of professional dog trainers that do nothing but confirm them.
I’d like to start by quoting some parts of a TED talk titled “Dog-friendly dog training”, given by Ian Dunbar. Dr. Dunbar is a veterinarian, dog trainer and animal behaviourist. He is one of the few who really has a clue about what dogs social structure and hierarchical system looks like. Unlike most other popular “dog gurus” talking about pack leaders, alpha wolves and dominance, he actually spent years researching the matter.
He is also a wonderful communicator, combining scientific clarity with irony and a very accessible style. One of his main points is, indeed, how easily behavioural problems with dogs follow directly from what we do, and how easily they would be preventable by simply thinking about the behaviour we want and actually teaching it (what I would call a strategy).
So, I quote: Now, I’m here largely because there’s kind of a rift in dog training at the moment that — on one side, we have people who think that you train a dog, number one, by making up rules, human rules. We don’t take the dog’s point of view into account. So the human says, “You’re going to act this way, damn it. We’re going to force you to act against your will, to bend to our will.” Then, number two, we keep these rules a secret from the dog. And then number three, now we can punish the dog for breaking rules he didn’t even know existed. So you get a little puppy, he comes. His only crime is he grew. When he was a little puppy, he puts his paws on your leg — you know, isn’t that nice? And you go, “Oh, there’s a good boy.” You bend down, you pat him — you reward him for jumping up. His one mistake is he’s a Tibetan mastiff, and a few months later, he weighs, you know, 80 pounds. Every time he jumps up, he gets all sorts of abuse. I mean, it is really very, very scary the abuse that dogs get.
Speaking  in terms of strategy, let’s formulate it this way:

a) Decide how would you like your dog to greet you (i.e. “sit nicely and wait for me to come to pat you”)

b) figure out the best way of how to do that (i.e. luring him into that behaviour and rewarding him as soon as he does so)

c) Be consistent and reinforce this behaviour over time.

It’s as simple as that. And you have no troubles whatsoever with one of the most common problems that makes dog owners’ to get crazy.

We just react. The puppy jumps up, the natural reaction is that it “feels” cute. We don’t strategically think what you want to achieve. It feels cute and we reward him. Later he’s big and heavy, and when he jumps up the natural reaction changed. Now it “feels” annoying, so we punish him (although, technically speaking from the point of view of animal behaviour, that’s not a punishment, just random aggression).

These are so simple stategies, that it is almost unbelievable most dog owner will never resort to them. And here the problem is really not a lack of knowledge or data, but the lack of strategy itself. In the case of the large dog breed greating their owner by jumping on them, driving them crazy, the problem was not the lack of understanding of some surprising concept of behavioral science. The problem was based on the obvious fact that that little cute puppy will grow and become huge, something which even the less educated or intelligent person is perfectly well aware of. So, as we can see, the fact that we simply react to situations instead of thinking strategically what is the most likely outcome can lead us to spectacular failures even when we are perfectly aware of all the required facts.

Of course, besides strategy, from the perspective of the Functional Mindset, there is an other component that may cause troubles: lack of critical thinking. This is often an issue as well, and so is even in this case. Some people think they will achieve an obedient dog without ever teaching them the actual actions they need to perform, but instead doing random “dominance” stuff such as  never letting them walk in front of them or always eating before them.
Come on, how is your dog supposed to understand that you don’t want him to bark when your neighbour comes to visit because you yell at him if he walks in front of you when you’re on the leash?

Now, this is indeed already a bigger issue, as behavioral problems with dogs are not only annoying to some people, but can actually lead the owner to abuse, abandon, or kill their dog. As Dunbar puts it: timely training saves lives. “Unfortunately, far too many dogs are abandoned at shelters and ultimately euthanized because their owners did not know how easy it was to train them as a puppy. […] Bad Behavior is the #1 terminal illness in dogs.”

As a culture, as a society, we love dogs. They are one of the few animals in the world people actually care about and respect (well, sort of). Dogs are told to be people’s best friends. But are we best friends to them?

Most people, even those well intentioned, generally will avoid a strategical and critical discussion about dog behaviour. Instead, we rely on lore, legends, oral transmission of any kind of unverified knowledge. Professionals often don’t help (partly as it’s not a real profession and any one can decide to call himself or herself professional dog trainer), and those who have real knowledge get a bad press as they contradict all the charlatanism we are used to.

Although this is a problem with critical thinking as well, which is the second component of the Functional Mindset, as we have seen this can often be traced back to a simple lack of a stategical approach, even when all the relevant factors are known.

Dogs are the final victim of all of this. Not only considering those who are abandoned or killed (I don’t use the word euthanasia for this circumstances) by handlers who get enough of them, but also those who die, for instance, because the handler doesn’t have control on them and can’t stop them from running under a car or eating poisoned food.

Yet, my final example will be even worse, and we will go completely beyond personal success and improvement in little things from everyday life, talking about serious issues that can be deadly.

Coach, teacher and writer, my aim is to popularize the Functional Mindset as a way to improve everyday life. Working as a Life Coach, Personal Trainer and Mental Coach, and having a very broad insight due to my interests in many different fields – languages, literature, computer science, martial arts, psychology, animal beheaviour, physicis, neuroscience, meditation, and much more – I prefer tackling specific problems and goals by understanding the general mechanisms that are at work… and exploiting them.